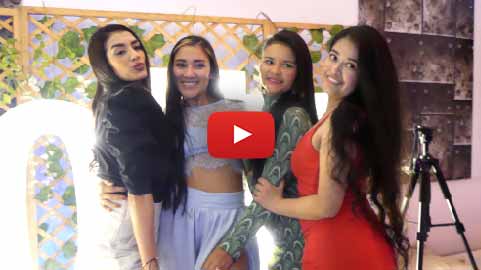 If you haven’t known yet, Colombia culture is one of the most preserved among other cultures throughout the globe. This is mainly because of their religion.

Roman Catholicism became the official religion of Colombia during the Spanish colonization period up until today. It emphasized the importance of Christian living. And their common practices are as follows:

The Roman Catholic Church became the social and political arbiter of Colombia for decades, which led to its influence ingrained in the Colombian Culture and Tradition.

What’s more, giving importance to the family is one of the most common Colombian values they take huge pride in.

On a side note, parental authority usually remains throughout Medellin women’s lives since they feel as if their daughters need to be extra protected because of the beauty they possess. Generally, these girls leave their homes when they get married.

Furthermore, among the customs of the people in Medellin is to extend help—not just financially, but also showing emotional support when someone in the family is in trouble.

Also, should there be any conflicts within the family, they make sure to rekindle the relationship over a meal. And who wouldn’t want to mend it after savoring the world-known Colombian cuisines? And yes, people in Medellin are great cooks!

Lastly, Latinas in Medellin are great dancers. They are often the winners of the World Salsa Federation. When you get to visit their city, you’ll get to hear salsa music everywhere because these people are passionate about dancing.

Cumbia, Merengue, Reggaeton, and Champeta are among the musical genres Colombians enjoy.

Religious Principles of Women in Medellin

Colombia has had no official religion since 1991—when the constitution stated that all religions are equal. Roman Catholic, however, remained predominant because of 75% Colombians identifying as Catholics.

Women in Medellin are devout Catholics with a high rate of mass attendance. Their faith is an integral part of their life that you won’t be surprised to hear the expressions: Dios te bendiga or God bless you, and Gracias a dios or Thank God often.

Roman Catholicism, like all religions, teaches the greatness of love and the importance of family. You can expect women in Medellin to express love and support for their family; moreover, the family tends to have a major influence on them because it is the most important aspect of their life.

In Colombia, marriage is sacred — the divorce rate is low. Medellin ladies know that marriage is a lifelong commitment of devotion to their partner.

Colombians are very traditional people. This shows on how they were able to maintain gender roles in their country where men are expected to cater to the needs of the family and as well as protect them, while women are expected to nurture the children and be the ones to do the house chores.

Since their country is a macho society, women are used to following and depending on the decision of the head of the family --- which is the husband or the father. They don’t have any issues with that. In fact, they’re very happy with where it’s at right now.

Up until this present day, there are less likely kids with broken families. Most of them grow seeing how their parents stay together even through the roughest times. And that’s exactly the kind of love these ladies are looking for.

And as previously mentioned, Colombians are indeed religious people. Therefore, there are quite a lot of Colombia culture, customs, and traditions for the home and family that is based on religious beliefs. Like during the morning, it is also customary for them to open their east window. This is said to bring God’s grace inside the house through the sun.

It is also very important for them to make sure that there are statues of Jesus or Mary in the house and that they are facing the direction of the front door. This is because they will be greeting the visitors of the house and anyone who comes in. This simply means that the people who they greet will be blessed too. This is what you will notice in most households in Medellin.

There are many cultures that have different customs and traditions throughout the world. And if you're serious in marrying a Colombian woman, it's a must for you to learn about Colombia culture as this shows how pure your intentions are.

There are many more things to learn about Medellin women. And as the best matchmaking and marriage agency, we made sure that all the resources you need are already here on our site. Also, we offer singles vacation where you’ll get to meet dozens or hundreds of women seeking marriage with foreign men. It’s a chance of a lifetime, so make sure not to miss it!

Eager to meet them today? Sign up for free now to browse on thousands of verified profiles of Medellin women!